Entertainment
59369 Hits
0 Comments
Have you ever wondered why on a sunny day, you don't simply incinerate in the face of the sun's relentless wrath? Not many of us would question why this would not happen, simply because Earth's atmosphere does not allow it to do so.

You see , when the sun fires off heat and light energy, only a very tiny amount of that actually reaches us directly. 99.9% of that energy is either reflected , or absorbed by the earth's atmosphere. You can think about it in the same way as a water filter. If I was looking for iron particles in water, and there was a water filter on my tap, why would I mine that .01% of iron out of the filtered water?

This in essence of using solar power is clearly a waste. Although land based solar panes have great potential, one must ask themselves "why fight for the crumbs when you can simply grab the whole bread?".

What we mean to say using this is quite simply that if solar panels were to be moved from , parse a solar factory in Kentucky to space above Kentucky, you would be able to eliminate all their current coal, fuel and nuclear powerplants. At the moment, the land based one would put out 1/100 the power of a fossil fuel factory, and 1/1000 of a nuclear powerplant.

Now, imagine that you can increase that solar power plant's energy production 99.99 fold! In essence, leaving a solar panel on the ground is plain stupid -not to mention, as the earth spins , the plate only has 12 good hours to absorb energy-.

Now lets asses some very valid solutions to the problem of why someone "simply hasn't done it yet".

1) Cost: Cost, although it would cost hundreds of thousands, if not millions to get a solar powerplant panel into the atmosphere on a satellite, maintenance would be practically impossible, and if the panels fail, the entire thing would have to be grounded, losing the company millions. And to be frank people, space is not merciful to flying objects.

2) Unreliability: men of earth are often times skeptical of innovation, simply because it has not proven it's worth in gold yet. People would assume that the plant would one day fall out of the sky, causing apocalyptic blackouts worldwide. It sounds almost as stupid as those poor saps that though debit cards were unreliable, and that the debit economy would collapse one day.

3) Lack of manpower: Lack of manpower, and lack of funds that accompany it, are disastrous for any "start up" company, no matter how great the product is. And lets face it, how many solar panel satellite hybrid scientists do you know? Even NASA would have difficulties funding such a project.

Now putting the reality of risk involvement aside, there are two feasible ways to accomplish this:

1) The creation of a microwave transmitter satellite that transmits pure heat waves to a receptor below. This would act like a laser beam, firing energy at a reception plate below, giving the receptor near infinite energy 24/7. But we must say, we feel sorry for anyone that accidentally gets hit by 9999 degree heat waves :P 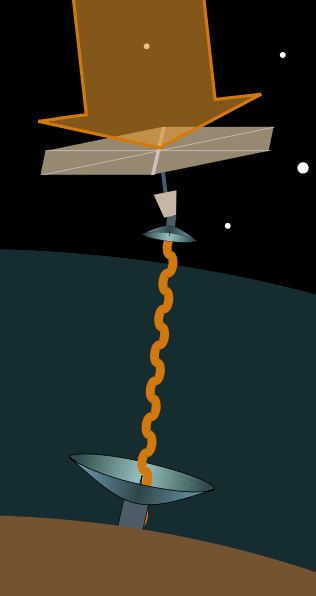 
2) A direct circuit! How complicated can it be right? Just taking a carbon fiber coated cable with some sort of powerful conducting material, and attaching it to the powerplant, giving us 100% of the generated power.  This sounds easy, but out of anything said above, it is the most absurd. No cable can actually do this, let alone not break when the satellite moves. You would have to use some sort of godly material, something that stretches, and is unreachable. 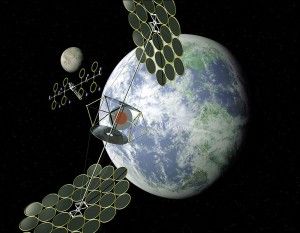 We conclude that although this is a potentially perfect, economical idea, it has too many flaws to be considered feasible. It may need fifty or so years before this nQQb idea can finally take a more comprehensive, and working status. We congratulate all the research and investment on the idea, and hope to write more on this matter if anything interesting happens!
Facebook Twitter LinkedIn Xing VK Pinterest Reddit Pocket
How do you feel about this post?
Happy (0)
Love (0)
Surprised (0)
Sad (0)
Angry (0)
Tags:
making solar power stronger noob satellite solar powerplant satellite
two million dollars of wii consoles stolen
How to create your own internet browser The move towards holy war
We are pleased to announce that within just a few weeks we were able to rework an old game called holy war in such a way as to make integration with this portal possible. The first of these additions ...
Read More

Indian rape protesters to be hosed
A gang rape involving 24 men and woman who was thrown off a moving bus has caused wide protest throughout new Delhi. New Delhi is now experiencing an influx of rape cases, a 400% increase to be exact....
Read More
Im a fat bald guy
"Thats right gentlemen, I'm a fat bald guy. I'm like 40 years old, and I live in my parent's basement, alone.Every couple of months I come out to see the light.My eyeballs burn when I look at the ligh...
Read More
Sign In   Register
Sign In